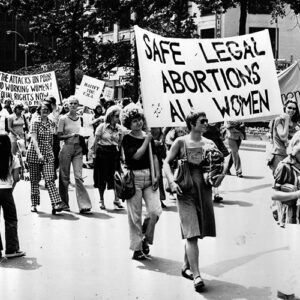 A person may choose to have an abortion until a fetus becomes viable, based on the right to privacy contained in the Due Process Clause of the Fourteenth Amendment. Viability means the ability to live outside the womb, which usually happens between 24 and 28 weeks after conception.

The law in Texas permitted abortion only in cases where the procedure was necessary to save the life of the mother. When Dallas resident Norma McCorvey found out that she was pregnant with her third child, she tried to falsely claim that she had been raped and then to obtain an illegal abortion. Both of these efforts failed, and she sought the assistance of Linda Coffee and Sarah Weddington, who filed a claim using the alias Jane Roe for McCorvey. (The other named party, Henry Wade, was the District Attorney for Dallas County.)

McCorvey gave birth to her child before the case was decided, but the district court ruled in her favor based on a concurrence in the 1965 Supreme Court decision of Griswold v. Connecticut, written by Justice Arthur Goldberg. This concurrence had found that there was a right to privacy based on the Ninth Amendment of the Constitution. However, the district court refrained from issuing an injunction to prevent the state from enforcing the law, leaving the matter unresolved.

Issue: Whether a plaintiff still has standing to bring a case based on her pregnancy once she has given birth.

Holding: Yes. The mootness doctrine does not bar her case from being heard, even though this individual plaintiff’s position would no longer be affected, and she did not have an actual case or controversy. This situation fits within the exception to the mootness rule that covers wrongs that are capable of repetition yet evading review. Most cases are not heard through to appeal in a period shorter than a pregnancy, so strictly applying the mootness doctrine would prevent these issues from ever being resolved.

The majority found that strict scrutiny was appropriate when reviewing restrictions on abortion, since it is part of the fundamental right of privacy. Blackmun was uninterested in identifying the exact part of the Constitution where the right of privacy can be found, although he noted that the Court had previously located it in the Fourteenth rather than the Ninth Amendment. The opinion applied a controversial trimester framework to guide judges and lawmakers in balancing the mother’s health against the viability of the fetus in any given situation. In the first trimester, the woman has the exclusive right to pursue an abortion, not subject to any state intervention. In the second trimester, the state cannot intervene unless her health is at risk. If the fetus becomes viable, once the pregnancy has progressed into the third trimester, the state may restrict the right to an abortion but must always include an exception to any regulation that protects the health of the mother. The Court, which included no female Justices at the time, appears to have been confused about the differences between the trimester framework and viability, which are not necessarily interchangeable.

It is interesting to note that Blackmun was particularly invested in this case and the opinion, since he had worked at the Mayo Clinic in Minnesota during the 1950s and researched the history of abortions there. This may explain why he framed the opinion largely in terms of protecting the right of physicians to practice medicine without state interference (e.g., by counseling women on whether to pursue abortions) rather than the right of women to bodily autonomy.

White criticized the majority’s arbitrary choice of a rigid framework without any constitutional or other legal foundation to support it. He believed that this aggressive use of judicial power exceeded the Court’s appropriate role by taking away power that rested with state legislatures and essentially writing laws for them. White argued that the political process was the appropriate mechanism for seeking reform, rather than letting the Court decide whether and when the mother should be a higher priority than the fetus.

William Hubbs Rehnquist (Author)
Rehnquist expanded on the historical elements of White’s argument. He researched 19th-century laws on abortion and the status of the issue at the time of both the Founding and the Fourteenth Amendment. His originalist approach led him to conclude that state restrictions on abortion were considered valid at the time of the Fourteenth Amendment, so its drafters could not have contemplated creating rights that conflicted with it.

William Orville Douglas (Author)
More concerned with doctrinal sources than Blackmun, Douglas pointed out more forcefully that the Fourteenth Amendment rather than the Ninth Amendment is the appropriate source of the right of privacy.

Potter Stewart (Author)
Stewart argued that the right of privacy was specifically rooted in the Due Process Clause of the Fourteenth Amendment.

Warren Earl Burger (Author)
Burger felt that two physicians rather than one should be required to agree to a woman’s request for an abortion.

The Court was praised in many circles for its progressive attitude toward evolving social trends, even though the decision was framed in paternalistic language and seemed more focused on protecting physicians than women. However, many commentators have viewed its decision as a prime example of judicial “activism,” a term that refers to when the Court is seen to infringe on the authority of other branches of government.. A magnet for controversy to the current day, Roe has been challenged consistently and lacks support from many current members of the Court. The trimester framework proved less workable than the majority had hoped, and decisions such as Planned Parenthood v. Casey have eroded what initially seemed like a sweeping statement in favor of women’s rights. Many states that oppose Roe have enacted laws that will go into effect in the event that it is overturned.