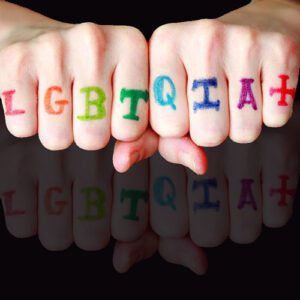 It’s important to note that gender identity is not determined by one’s sex assigned at birth and that sex and gender are not the same.

As the world becomes more inclusive of people’s sexual orientation and gender identity, the letters within this acronym have similarly evolved. Read on to discover the history behind this colorful acronym.

Before the origin of “LGBT,” the language used to describe this community was actually quite limiting. During the 1950s and 1960s, people in this group were often referred to as the “gay community.”

However, these years also proved to be a monumental time for advancements within the LGBTQIA+ community. The year 1969 is often seen as a turning point in American history in shifting attitudes and politics regarding sexuality. Political movements such as the Stonewall Riots brought attention throughout the United States and around the world regarding the injustice experienced within this community — it was a pivotal time for the “gay rights movement.”

As these movements progressed, people recognized that the term “gay” didn’t encompass all sexual orientations and gender identities. In the 1980s, the LGBT acronym gained popularity and was adopted by many activist organizations by the 1990s. Let’s review the meaning behind these original letters.

“L” stands for lesbian: a woman who is physically, emotionally, or romantically attracted to other women

“G” stands for gay: a person who is physically, emotionally, or romantically attracted to people within the same gender

“B” stands for bisexual: a person who is physically, emotionally, or romantically attracted to people within more than one sex, gender, or gender identity

“T” stands for transgender: a term for a person whose gender identity or expression is different than their sex assigned at birth. Transgender should be used as an adjective — not as a noun or a verb.

Why was ‘LGBT’ incomplete?

Although the LGBT acronym was much more inclusive than terms used in the past, it still left out people who don’t identify with being lesbian, gay, bisexual, or transgender. And that’s where the “Q” came in.

“Q” stands for Queer: an adjective used by some people whose sexual orientation is not exclusively heterosexual or straight. It’s an umbrella term that includes people who have non-binary or gender-fluid identities.

In a 2018 Human Rights Campaign (HRC) survey, over 12% of LGBTQ youth identified as non-binary, and 9% identified as genderqueer or gender non-conforming.

“Q” can also stand for Questioning: When “Q” comes at the end of LGBTQ, it can also mean questioning. Questioning is a term used to describe a person who is exploring their sexual orientation or gender identity.

How has LGBT changed to LGBTQIA+ over the years?

History has shown that LGBT continues to be an evolving abbreviation as the world gains a better understanding of people’s sexual orientation, identity, gender, and expression. LGBTQIA+ has become a prevalent acronym adopted by the community. Let’s discuss what these additional letters mean.

“I” stands for intersex: a term used to describe a person who is born with differences in their sex traits or reproductive anatomy that don’t fit typical definitions of female or male. There may be differences in regards to genitalia, chromosomes, hormones, internal sex organs, and/or secondary sex characteristics (e.g., pubic hair, breasts, facial hair, etc.).

“A” stands for asexual: a term used to describe a person who lacks sexual attraction or desire for other people. It’s different from celibacy, in which people make a choice to abstain from sexual activity.

“+” stands for plus: The “+” sign is a symbol that represents members of the community who identify with a sexual orientation or gender identity that isn’t included within the LGBTQIA acronym. It’s an inclusive way of representing gender and sexual identities that letters and words cannot yet fully describe.

How will the LGBTQ acronym continue to evolve?

Although the LGBTQ acronym has been adopted by both the HRC and GLAAD, some people may say that it doesn’t fully represent the entire community.

As society continues making progress in improving inclusivity within the LGBTQ community, our understanding of different sexual orientations and gender identities will continue expanding. The goal is to continue fostering an inclusive and welcoming community where everyone feels appropriately represented.

Understanding LGBTQ2S+ and other expanded acronyms

Since there are so many different identities, it’s difficult to fully capture everyone’s sexual orientation and gender. The acronym has continued to change over the years and now includes the following:

“2S” stands for two-spirit: a term that traditionally originated from Native American culture that describes people who are male, female, or intersex and have both a male and female spirit within them. It’s sometimes referred to as a third gender.

“P” stands for pansexual: A term that describes a person who may have a physical, emotional, or romantic attraction to people of any gender. They may not experience these feelings at the same time or in the same way or level.

Why are terminology and naming so important in the LGBTQIA+ community?

As the world gains a better understanding of people’s sexual and gender identities, the acronym may continue evolving to ensure that everyone is seen and included. Additionally, the acronym can help those with similar experiences connect with others — and help articulate what they’re feeling and experiencing through the terminology.

Using exclusionary terms such as the “gay community” should be avoided since it doesn’t accurately represent the community’s vast diversity. Acronyms such as LGBTQ or LGBTQIA+ are more inclusive of the sexual orientations and gender identities that exist.