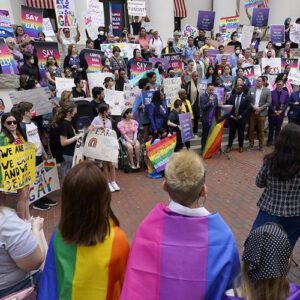 Statement from the American Board of Sexology: We, the American Board of Sexology as a Board of professional Sexologist with differing viewpoints takes NO side on the issue with Florida’s HB1557. We respect the views on all sides of this issue and have posted the article from PolitiFact and the actual bill for you to comment and decide. Please also note that we will not censure the viewpoints of postings here, except for vulgarity, language, harassment, threats, or SPAM.

Florida classrooms have become a site of regular battles in the culture wars. The most recent fight is over sexual orientation and gender identity.

State lawmakers approved a bill that would prohibit classroom instruction on these issues in kindergarten through third grade. HB 1557 awaits the signature of Gov. Ron DeSantis, a Republican who has stood up for the bill as it has come under criticism from Walt Disney World, LGBTQ activists, the Biden White House and “Saturday Night Live.”

Supporters hailed the need for parents, and not teachers, to have control over such discussions, part of a broader push to control the content of classroom lessons. But critics nicknamed HB 1557 the “don’t say gay” bill, warning it isn’t necessary and makes some students feel unsafe by singling out LGBTQ material as dangerous and inappropriate.

In addition to barring instruction in elementary-age classrooms that touch on sexual orientation or gender identity, the bill will also prohibit schools from withholding information from parents regarding their child’s mental, emotional or physical health. And the bill allows parents to file lawsuits against school districts they believe violated the legislation.

Much remains unclear about how school districts would implement this ban — matters that will likely be settled in court. Ambiguous language about classroom lessons means content in older grades could be affected, too.

Unproven claims about ‘social engineering’ and injecting ‘transgenderism into kindergarten’

Supporters said the measure is intended to push back on attempts to incorporate gender identity and sexual orientation into the education of young children.

In a campaign-style video shared by Fox News, DeSantis addressed criticism of the bill in front of a friendly crowd: “In the state of Florida, we are not going to allow them to inject transgenderism into kindergarten.”

“First graders should not have woke gender ideology imposed in their curriculum, and that is what we are standing for,” DeSantis said.

These statements echo remarks by state Sen. Dennis Baxley, R-Ocala, the bill’s Senate sponsor who said he was addressing “social engineering” that could result in more children identifying as gay or transgender.

Brandon Wolf, press secretary of LGBTQ advocacy group Equality Florida, said these tropes may further stigmatize LGBTQ students. “Suggesting that sexual orientation or gender identity is ‘contagious’ is not based in fact.”

Baxley did not respond to PolitiFact’s request for evidence. When we asked DeSantis about his statement, press secretary Christina Pushaw said that DeSantis is trying to prevent indoctrination.

Angela Mann, associate professor of child psychology at the University of  North Florida, said she was not aware of any research showing classroom lessons could alter sexual orientation or gender identity.

“I am not aware of any K-3 grade teacher that is campaigning or ‘social engineering’ students to be LGBTQ such that it could be studied to tell whether or not such a campaign could be successful,” Mann told PolitiFact.

Democratic lawmakers tried to amend the provision to prohibit classroom instruction intended to change a student’s sexual orientation or gender identity. They also tried to narrow the bill to specifically bar classroom instruction on “sexual activity.” Sen. Jeff Brandes, a Republican from St. Petersburg, tried multiple times to amend the bill to bar instruction of “human sexuality,” another effort to make the bill less about identity. None of these amendments passed.

The Florida Department of Education told PolitiFact that sexual orientation and gender identity are not included in the curriculum taught in the state’s kindergarten through third-grade classrooms.

Pushaw said that not including a topic in a curriculum does not mean it won’t be brought up in classroom instruction, pointing to a guide used by Palm Beach County Schools intended to create a “safer place for all students.”

The guidance includes definitions of terms related to sexual orientation and gender identity — including gay, lesbian and transgender — that teachers are encouraged to use when applicable. It says by “addressing LGBTQ+ issues in school, we are NOT talking about SEX with your children — we are talking about family, identity, and respect for others.”

It is unclear whether the bill only affects grades K-3

Some people have suggested that critics of the bill are misinformed about how far-ranging it is — saying that it does not affect students in grade four or higher.

“The public was not made aware that the bill only prohibited discussions of sex and gender from KINDERGARTEN through THIRD GRADE,” Drew Hastings, an American author and comedian, tweeted March 14. “Other than a predatory, grooming pedophile leftist, I can’t think of anyone who would have a problem with that.”

The text of the bill only mentions kindergarten through third grade, but the wording could be interpreted to apply to older students.

The bill states that classroom instruction on sexual orientation or gender identity is barred “in kindergarten through grade 3 or in a manner that is not age appropriate or developmentally appropriate for students in accordance with state standards.”

Florida Rep. Joe Harding — the House bill’s sponsor — said at a Feb. 17 hearing that classroom instruction on such topics could be restricted beyond third grade if it is determined not to be age or developmentally appropriate.

“Anytime a law is vague there’s going to be litigation,” Jane Windsor, a Florida attorney who specializes in education law, told PolitiFact. “They did not draft it well, so it could be clearly understood past the third grade.”

The bill does not define what is considered appropriate. Critics have said that this may leave school districts susceptible to legal action from parents with varying definitions of what they consider appropriate for their children.

But this argument ignores a provision included in the bill that instructs the Florida Department of Education to define what is appropriate.

Clay Calvert, a professor at the University of Florida Levin College of Law, told PolitiFact that the department could decide to impose more stringent limitations around classroom lessons.

“What age appropriate or developmentally appropriate really means remains to be seen,” Calvert said. “It definitely is a possibility that they could go above the first part of the language which caps the restriction at third.”

The word ‘gay’ is not banned in Florida​

People on Facebook and Twitter have said that Florida Republicans want to ban the word “gay” in school.

“GOP’s 2022 platform: Ban books, Ban abortion, Ban Black history, Ban transgender teens, Ban saying ‘gay’ and Ban voting,” said Dean Obeidallah, a left-leaning radio host and comedian, on March 11. “But get this — the GOP tell us they are all about ‘Freedom.’”

On SNL’s “Weekend Update” segment,  anchor Colin Jost told cast member Kate McKinnon, who is gay, that the bill “means that you can’t acknowledge that ‘gay’ exists at all.” McKinnon then slammed the legislation, saying, “I am deeply gay — sorry, deeply concerned. It just seems like this is going to make kids gay and trans — sorry, depressed and suicidal.”

These claims can largely be attributed to the legislation’s “don’t say gay” nickname, coined by  Equality Florida. The moniker “became a way for the community to articulate the very real harms this legislation makes possible,” Wolf told PolitiFact.

The legislation does not literally prohibit Floridians from saying the word “gay,” but it does prohibit classroom instruction on “sexual orientation or gender identity.” The preamble of the bill goes further, saying it is meant to bar “classroom discussion” on those topics.

The bill does not define classroom instruction or discussion. The language could be interpreted to mean that an educator would not be allowed to read a book to students that recognizes a same-sex couple.

While Florida Republicans have said that children of LGBTQ parents would be able to discuss their familial structures in class, that language is not included in the bill.

Democratic opponents of the bill tried to exclude discussion related to family structures, historical events or bullying prevention, but their amendments failed.

“The issue would arise if a student were to raise a question during a lecture about sexual orientation or gender identity, even if the instruction itself was not about that,” Calvert said.