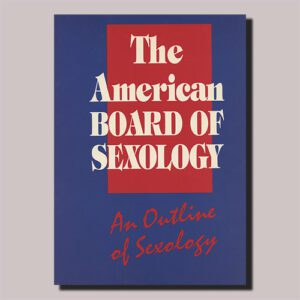 Sexology is the systematic study of human sexuality. Once stated, it is apparent that this definition oversimplifies. For one thing, in order to help understand human sexuality, sexologists find it necessary to study our sibling primates. This publication is an outline for those seeking a certification in Sexology.

The sexological perspective develops out of awareness of the history of sexological discourse. At the beginning of this century, the pioneers of sexology mapped out a science that would explore every cultural, psychological and biological aspect of human sexual behavior from every conceivable viewpoint. Sexological study thrived, especially in Germany, until the National Socialist Party extinguished its life in 1933. Reborn in the United States, sexology again came under devastating attack in the McCarthy era. The Kinsey effort to create a significant record of data on sexual behavior was effectively halted, but the study of sexuality then expanded in different directions, awakening interest in thousands of scientists, clinical practitioners, academics, writers and media people. Today sexology is for, a third time, under political attack from those representing repressive/oppressive groups wishing to restrict the rights of individuals and cutting back the ways in which sexologists may function.

Dr. William Granzig was the 6th president of AASECT. He served from 1978-1980. Dr. Granzig was also the youngest president at the time and the first gay president. He was both a sex educator and sex therapist.

During his presidency the certification program was started. Dorothy Strauss became the first chair of the newly formed certification committee. A great deal of effort and energy was put into creating the requirements for certification. The SAR requirement was born out of the premise that at that time, people didn’t talk about sex nor aware of their attitudes of sex and how it affected their sexuality.

He was the first editor of the journal that was included as a benefit of membership. The AASECT office, at his time of presidency, was located in Washington, DC. Bostrom was the management company that managed the association.

One of the AASECT members that stood out at the time was Dr. Ruth Westheimer, the infamous “Dr.Ruth”. Dr. Granzig quipped she helped keep the organization “respectable”!