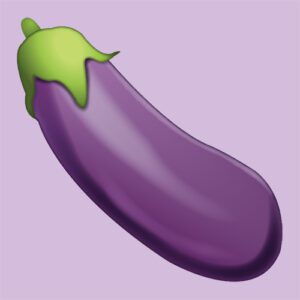 Eggplant emoji is the picture of the vegetable of dark violet color, known also as aubergine. Though in terms of its original meaning it is much like 🍅 Tomato emoji and other vegetable-related emojis, Eggplant somehow has become a subject of numerous jokes and it is mostly used as a synonym for male genitalia across social media — this surprises many people, yet it is so. It is also sometimes used as a synonym for useless.

The Eggplant emoji, also known as the Aubergine emoji, is a perfect example of an emoji that has a double meaning. The eggplant is a large purple or white vegetable with round edges.

Be careful when using the eggplant emoji as its meaning could change depending on your intention. Japanese people believe that dreaming about eggplant is lucky. So a Japanese user may use the emoji to represent good luck.

You can also use this purple fruit emoji to describe the ingredients you used in a dish. Many dishes using eggplants can be found worldwide. This means that many people all over the world could use the aubergine emoji to present their dishes! The nutritional health benefits of the eggplant are also something worth noting. First, aubergine is considered a nutrient-dense food. Second, it’s also rich in antioxidants. And third, can help prevent heart disease.

Finally, the Eggplant emoji is more infamously known as the “penis emoji.” This sexual emoji has been related to the phallic organ even before the use of emojis. People began using it for sexual innuendos along with the Peach emoji, the Water Droplets emoji, and the Tongue emoji. It’s famously known to be used by some people to ask for dick pics, sexual favors, or even when questioning the size of the penis in question. As the emoji began to have rising notoriety for its resemblance to the penis, Instagram banned the hashtag eggplant in 2015.

From a millennial – DUH to the Boomer.

So, now you know.